Author debuts Southern novel with bite
All that local author Tolar Miles needed for inspiration came to her as she grew up in the South.
Miles’ debut novel, “Mud Marbles,” focuses on two affluent families from the fictitious town of Cotton Tree, Ala. Sisters Marilyn and Kathryn are also neighbors whose favorite pastime is sipping martinis from Mason jars. They relax on Marilyn’s front porch in the Gulfside town of Orange Beach, Ala., and reminisce about family and the times they visited Cotton Tree.
The sisters’ favorite drink includes Tito’s Handmade Vodka — a real brand the company (TitosVodka.com) permitted to be used in the novel. After all, Miles said, there’s just something about a nice cocktail that invokes Southern hospitality and gets the stories flowing like sweet Tupelo honey.
“It’s a nice, relaxing read that can be enjoyed with or without a cocktail,” said TouchPoint Press publisher Sheri Williams. “But for those who prefer to enjoy a nice drink while reading, the author has an added perk — the real Mud Marbles recipe is included at the end of the book.”
Tolar Miles is the pen name for a freelance writer and author who grew up along Florida’s Gulf Coast and studied creative writing at Florida State University. She’s a member of the Society of Children’s Book Writers and Illustrators.
“I have been writing stories for as long as I can remember,” Miles said. “I wrote short stories for children’s magazines in the ’90s, and I had a children’s book published in 2010 titled, ‘Where The Palm Trees Sway.’ It’s an early reader about the fun things to see and do along the Gulf Coast.”
“Mud Marbles” revisits a web of memories from sorority sisters shelling peas, to charity bake sales and finding Confederate gold in a hidden ballroom, while invoking the charm of the South and exposing long-buried secrets.

Mud Marbles has been released in paperback and as an ebook, and is available through major online retailers including Amazon, Barnes & Noble, Books-a-Million, iTunes and more.
‘Mud Marbles’
• What: New novel from author Tolar Miles of Lynn Haven
• Price: $12.98 (trade paperback, 164 pages, TouchPoint Press)
• Details:www.tolarmiles.com 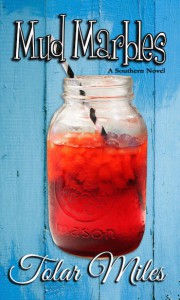